Last night, my friends and I raged through heavy rain and disgusting flood water just to get to church. It was a struggle to get there, and it was impossible not to feel even a little hopeless. We all felt wet, dirty and tired. Some of us would really rather go home, if not for the willpower of one of us.

We reached our destination after a series of unfortunate events, feeling glad and proud of ourselves for braving through unruly conditions. We arrived late for the mass, but just in time for the festivities. The dancing and the fireworks were awesome. As cliche and pathetic as it may sound, Katy Perry's Firework really came to mind at that moment.

When it was time to go home, we were tested yet again. Getting a ride was close to impossible. When we decided to go inside EMall's back entrance and go out the front to avoid getting wet, we were blocked. The security guard told us the mall was closed. So we were left standing outside along with more than fifty people. Just when the DJ at the radio booth started to play California Gurls, April saw a jeepney we could ride. It was full but at least there was hope now. We could trace where they came from. So we walked in the rain, singning California Gurls in the streets.

We did get to ride a jeepney after, but it only brought us halfway home. When we reached our stop we decided to get a cab so we can get home ASAP. We couldn't wait to get clean and cozy. Getting a cab seemed easier then, but most refused upon knowing the destination because they were headed the other way. After five rejections, the cab to save our asses came along. When we got in and heard what was on the radio, we just laughed. It was Teenage Dream about to end. We laughed recalling how Katy Perry's songs were played during the highlights of our night.

Last night was a struggle, but we knew it was also a test of faith. It's easy to give up on the challenge if you were alone, but the company of friends made it all bearable for us. That and Katy Perry's songs. Haha!

I've always had a thing for cute notebooks and journals, but can't really find a use for one. I'm bad at keeping track of my life, and I'm not one for writing notes either. As for writing poems & stories, I prefer writing them on the computer. That is why I always resist the impulse to buy, and instead wait for someone to give me one. My collection is slow-growing but the pace it's going suits me just fine. 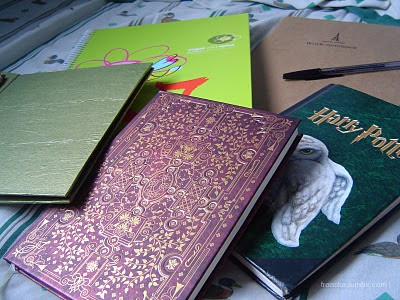 The green Harry Potter journal was my first. A gift from my father when I turned 13. It holds the records of some important events that took place when I was in high school written in a painfully embarrassing way. Haha! The next one is the big bright green notebook that Liz gave me for Christmas 2007. My "whatever" notebook. I basically just fill it with whatever comes to mind. The third one to join my collection is the green handmade, almost-iridescent green journal I got from Gwen for Christmas 2008. I'm currently still struggling to turn it into a scrapbook. The fourth addition would be the brown Paris notebook Nicole gave me last May. It's the one I'm currently using as a journal and trying so hard to fill. The last one to become part of my feeble collection is James's gift last Christmas. A maroon-and-gold journal that simply looks magical.

If I haven't been writing in my blog lately, it's because I've been writing in my journal instead. The intimacy of writing something to be read by you and you alone has become more and more appealing to me. I find it more liberating because your only audience is yourself. You can bare as much soul as you want, and you won't feel so weird doing it. It's like finding yourself without nobody watching, so you're left with nothing but your instincts to guide you. It's like therapy for free. I'm not saying I'm giving up on blogging however, because it brings me a different kind of joy as well. I'm simply saying that I'm rediscovering a different world. A world of my own.

I know keeping a journal (or a diary if you prefer the term) is not an easy task, but it's really not so hard to do either. You just do what feels right for you. You write, paste, draw, whatever! It's your journal so you make your own rules. That's the best thing about it. You get to keep some memories alive as well. It's like making a personal time machine. You read back and you get transported back in time. If you have one, you probably know what I'm saying, but if you don't, well, try starting one if I've got your curiosity peaked. :)

Franstar
I'm currently in this long and tedious process of figuring out who I am and what I want to do in my life.

Second Star To The Right 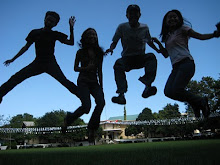 A World Of My Own